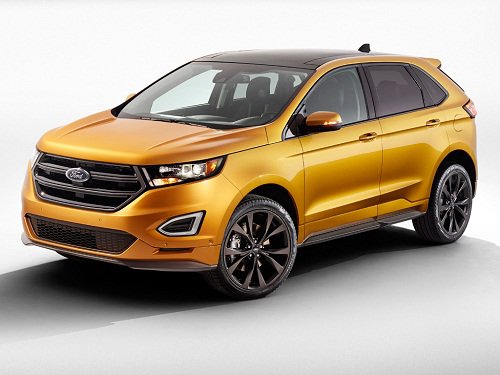 Looking to buy a new Ford Edge? The upcoming 2015 Ford Edge will make its way to North America early next year at Ford dealers across the country. The new design is more modern and chiseled than before, though it still evokes the styling of the original, first-generation Edge crossover.

The all-new Edge has been moved to an updated platform, and will be based off of the Ford Fusion, rather than the older Ford Taurus. This should mean better handling for the mid-size SUV, and will help lower the overall weight of the vehicle. The new Edge will also be the first Ford vehicle to have an EcoBoost engine come as standard, with the new version of the 2.0 liter EcoBoost four-cylinder.

The Sport version of the Edge will be the first to feature Ford’s new adaptive steering technology to improve driving dynamics. The Edge Sport is also getting an all-new 2.7 liter EcoBoost V6, which will have over 300 horsepower, and stiffer suspension for 20 percent less body roll.

Ford’s goal is to make the Edge the technological showcase for the brand, and is rolling out a suite of new features to improve the driving experience and comfort level of the all-new crossover. The Edge will have auto stop-start, front and rear cameras, active park assist, collision and lane-keeping warning systems and SYNC with MyFord Touch.

New safety features being introduced on the new Ford Edge include an active glove box knee airbag (as seen on the upcoming 2015 Mustang) and inflatable rear safety belts to reduce injuries during an accident by providing more surface area to absorb impact pressure.

Search our inventory for new Ford Edge crossovers in stock.