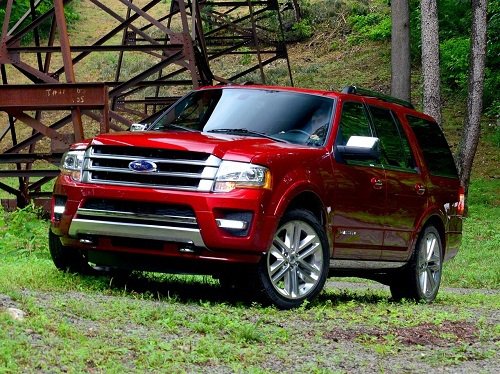 The extensively refreshed 2015 Ford Expedition will go on sale later this year in North America, with a huge list of new standard and optional features. The Ford Expedition will be offered in the upscale Platinum trim level, and will have the company’s 3.5 liter EcoBoost V6 engine as standard, paired with the SelectShift six-speed automatic transmission.

Ford Motor Company discovered that there was still a need for a full-size traditional SUV in their lineup due to consumer demand, and the new 2015 Expedition looks to be one of the best in the segment. Ford mentioned Expedition customers want space, performance, comfort and capability in one package, and are not willing to compromise.

The new Expedition will continue to be offered in both standard and extended length versions, both of which include three rows of seating. The 2015 Ford Expedition includes a number of new Ford technologies, including electric power-assisted steering and SYNC with MyFord Touch, and will be the first Ford vehicle to offer continuously controlled damping suspension with three selectable drive modes. Drivers have the option to pick between comfort, normal and sport based on their needs.

The all-new Ford Expedition will have more sound deadening than previous expeditions, and will have greatly reduced road and engine noise. Acoustic glass is being used for the windshield on all Expedition trim levels to reduce interior noise, and Limited, King Ranch and Platinum trim levels will have driver and passenger acoustic window glass as well.

Along with best in class towing of up to 9,200 pounds, the 2015 Ford Expedition looks to be the best do-everything SUV for families on the go.