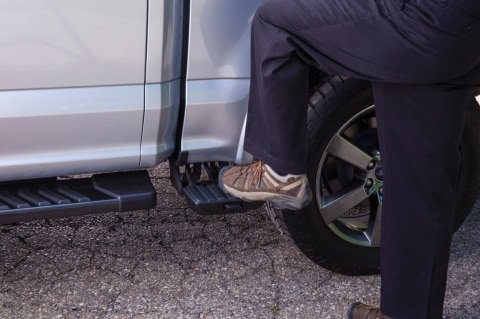 Years of engineering work have gone into the 2015 Ford F-150, including extensive use of aluminum for weight savings and more efficient EcoBoost engines. When it came to making things easier for the driver, Ford went straight to their customers for feedback on what things they wanted most.

Many of Ford’s cars and SUVs come with smooth capacitive touch keypad buttons on the driver door to allow for keyless entry, but for the F-150 Ford decided to use hard buttons on the keypad so those wearing gloves wouldn’t have to take them off to get in. On the inside of the front doors, Ford made the window sill wide enough to be used as a comfortable armrest, and put indentations on the door handle to make it easier to close on a windy day.

To keep things simple, Ford made sure to group buttons together that had similar functions on the steering wheel and instrument panel. All lighting controls are in one location, as are all cruise control buttons and radio controls. Ford has also kept finger indents on the back of the steering wheel, where most manufacturers have gone to a smooth steering wheel.

Ford talked to F-150 drivers about what they wanted to see in the new MyView productivity screen in the instrument cluster, and they said essential vehicle information. On the 2015 F-150, drivers can customize what vehicle info they want displayed based on their needs, and all media information has been left on the center stack screen.

Other convenient new features include grooves in the tailgate handle to allow for easy opening and closing with one hand, and a new larger box step that accommodates a full-size work boot that easily stows under the bed side when not in use.