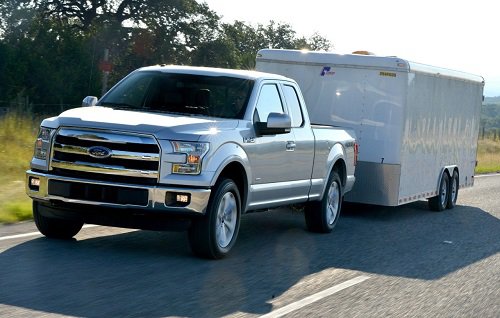 The 2016 Ford F-150 with the powerful and efficient 2.7-liter EcoBoost V6 engine was just named the winner of the Texas Truck Showdown Max MPG fuel economy challenge conducted by PickupTrucks.com. The F-150 beat out its four closest competitors, thanks to its outstanding fuel economy, capability and performance.

Ford engineers designed the 2.7-liter EcoBoost V6 to meet the requirements of more than 90 percent of light-duty truck customers, with V8-like power and V6 fuel economy. The engine produces an impressive 325 horsepower and 375 lb.-ft. of torque, giving it a maximum tow rating of 8,500 lbs. and a maximum payload rating of 2,250 lbs.

Since its launch, the 2.7-liter EcoBoost V6 has accounted for 30 percent of the F-150’s sales numbers, making it one of the most popular engine choices among F-150 customers along with the 3.5-liter EcoBoost V6.

Use of military-grade, high-strength aluminum in the body also helps improve the 2016 Ford F-150’s fuel economy by reducing weight, and has the added benefits of increasing strength and being more resistant to dents and corrosion.

The standard Auto Start-Stop system helps improve fuel economy by shutting off the engine when the truck is stopped. EPA-estimated gasoline fuel economy is best-in-class for the 2.7-liter EcoBoost engine, at 19 mpg city, 26 mpg highway and 22 mpg combined.

“In the end, we were impressed with the F-150 for its capability, fuel efficiency and composure when pushed hard,” said Mark Williams, editor of PickupTrucks.com. “For a small V-6 engine, it’s very impressive how well it almost eliminates the typical compromises half-ton customers have become accustomed to.”

For more information about the 2016 Ford F-150 with the 2.7-liter EcoBoost V6, visit us at 5 Star Ford near Dallas, Texas and take a test drive in the most capable and fuel efficient F-150 ever.