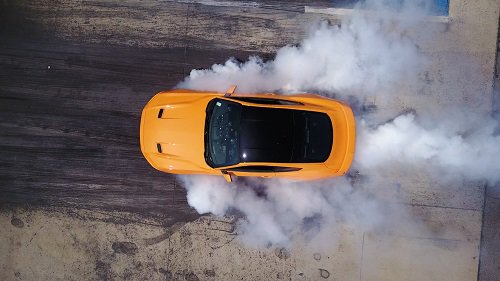 Ford is expanding the electronic line-lock feature to all Mustang models starting in 2018, making it a standard feature on both V8-powered Mustangs and those equipped with the 2.3-liter EcoBoost four-cylinder. The feature will be available with both the 10-speed SelectShift automatic and the six-speed manual transmission.

The electronic line-lock feature is traditionally used by drag racers at the starting line to heat up the tire rubber for increased traction when the light turns green. When Mustang drivers use this feature at their local track, it can help to achieve more consistent performance times, especially for those competing in bracket racing.

Mustang models equipped with the available 12-inch all-digital instrument cluster will see an animation of a spinning alloy wheel creating a cloud of tire smoke to indicate the electronic line-lock feature is activated. There is also a countdown timer displayed, along with engine RPMs and a speedometer.

“Burnouts just never get old, no matter how old you are and how many times you’ve done them,” said Vaughn Gittin Jr., Formula Drift Champion. “Who would have thought that we would see an EcoBoost Mustang producing 15 seconds of fury like this? You’ve got to love these rad things Ford is doing.”

Activating the electronic line-lock feature is as easy as using the steering wheel-mounted thumb switches to go through the instrument cluster menu. After the feature is engaged, the system builds pressure on the front brake calipers for up to 15 seconds, allowing the driver to spin the rear wheels while the car stays in place.

Stay up to date with the latest Ford Mustang news and take the legendary pony car for a test drive today at Sam Pack’s Five Star Ford of North Richland Hills.