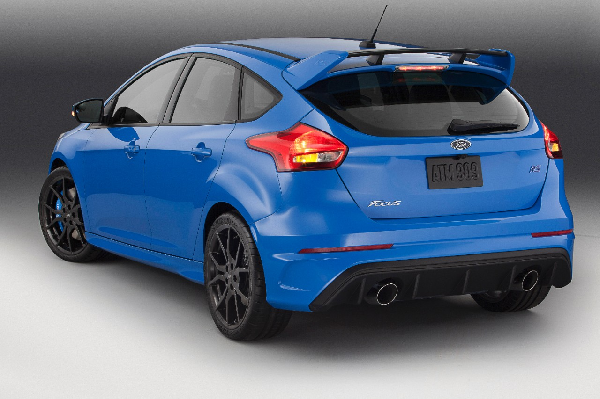 The all-new Ford Focus RS will be making its North American debut this week at the New York International Auto Show. This is the first Focus RS to come to the United States, with the previous generations being only available in Europe.

The Focus RS is Ford’s ultimate hot hatch, with a specially engineered 2.3 liter EcoBoost four-cylinder engine producing more than 315 hp and a Ford Performance All-Wheel Drive system with Dynamic Torque Vectoring. The new RS will even feature a drift mode, in addition to its other drive modes and launch control.

The Ford Focus RS will also feature the most powerful braking system ever fitted to a Ford RS car, with high-performance Brembo front calipers. The sporty exterior design was engineered to improve aerodynamics and cooling, with 9 percent less drag compared to the previous Focus RS.

Inside the RS, the driver is provided with Recaro sport seats, a flat-bottomed leather-covered steering wheel, alloy pedals, performance-focused gauges and an 8-inch capacitive touch screen with SYNC 3. Both the interior and exterior of the Focus RS have been designed to be stylish and functional, with a driver-centric cockpit and highly-effective aerodynamics.

In the U.S, the Ford Focus RS will be available in four colors, including RS-exclusive Nitrous Blue, Stealth Gray, Shadow Black and Frozen White. Bi-xenon HID headlamps are standard, as are new multi-spoke 19-inch alloy wheels, with are lighter and stronger than the previous generation’s wheels.

The Focus RS is part of Ford’s plan to bring 12 performance vehicles to market by 2020, including the recently announced Ford GT, Mustang GT350 and all-new Raptor.

“The all-new Focus RS is true to the core RS principles of innovative engineering and high performance,” said Joe Bakaj, vice president, Product Development at Ford of Europe. “Now, enthusiasts in North America will have a chance to become an owner of this remarkable performance hatch.”

Focus RS models are scheduled to start arriving at dealers nationwide in spring 2016. To take a look at other Ford performance vehicles like the Fiesta ST and new EcoBoost Mustang, check out our online inventory at Five Star Ford.