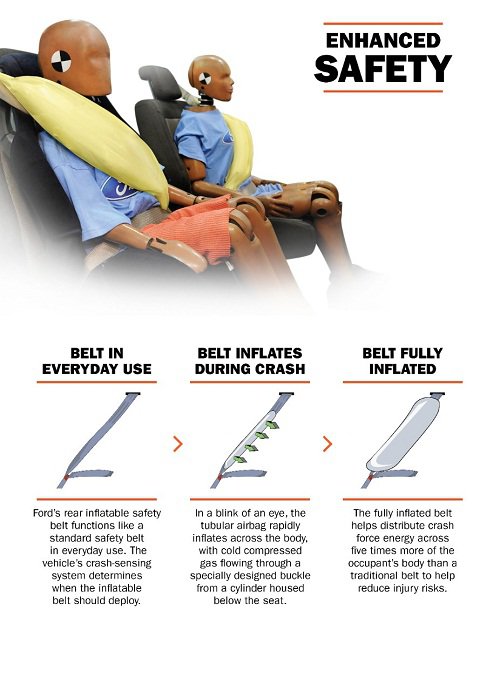 Searching for a safe new car from Ford? The safety experts at Ford Motor Company announced that they will begin licensing their inflatable safety belt technology to other industries, including competing car companies. The goal is to increase wider adoption of these safety belts so that passengers in a wide variety of vehicles can have better safety.

A number of Ford and Lincoln vehicles have had the inflatable safety belt as an option since 2010, and it has helped lessen passenger injuries, especially among the elderly and children. Ford says this technology has potential applications in military, airplane, helicopter and water travel as well.

The inflatable belt works by inflating a conventional looking seatbelt in the event of a crash, which allows for up to five times the area of a traditional seatbelt. This distributes the crash forces across an occupant’s torso, meaning less pressure on the chest and less head and neck motion.

Currently the inflatable safety belt is available on the Ford Explorer, Flex and Fusion for second row passengers. The new aluminum 2015 F-150 will soon have it optional, as well as the Lincoln MKT and MKZ luxury cars.

Along with the inflatable safety belt, Ford now has a growing number of safety technologies that are available for license, including Roll Stability Control and a driver alert warning system that gauges a driver’s attention level.