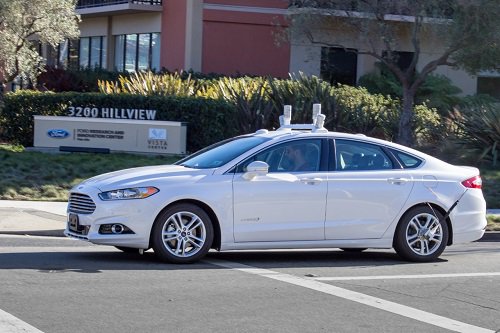 With a team of more than 100 researchers, engineers and scientists, Ford has one of the largest automotive manufacturer research centers in the region. The new research lab opened nearly a year ago, and has helped expand Ford’s presence in Silicon Valley.

The research and development center has also been attracting some top talent from around the world, with 80 percent of the team coming from the technology sector and the remaining 20 percent being Ford employees from the U.S., China, Germany and Australia.

A number of technological advancements have been made over the past year at the Silicon Valley facility. An autonomous vehicle virtual test drive study has allowed researchers to better understand and develop responses to unexpected things that could happen on the road without needing to perform real-world tests.

Engineers at Ford have also developed sensor fusion technology, which uses a variety of sensors on autonomous vehicles to track objects and provide and 360-degree view of the cars surroundings. This technology allows the vehicle to see street signs, other vehicles and pedestrians.

Ford has also built relationships with many top universities, and has expanded its collaboration with Stanford University. Ford and Stanford will be working on 13 projects together in 2016, covering the five areas of Ford Smart Mobility, which is more than double this year’s total.

If you would like to learn more about the 2016 Ford Fusion and the latest technology available in the full line-up of Ford vehicles, visit us at 5 Star Ford near Dallas, Texas today.