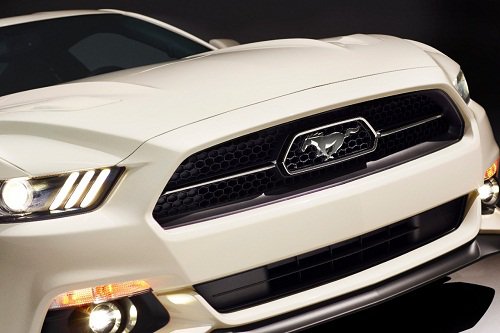 Drivers who have been waiting patiently will soon be able to get into the driver seat of the 2015 Ford Mustang, as dealers can now start placing orders for the Mustang fastback. Since the reveal six months ago, details about the new car have been slowly coming out, building up the anticipation for its launch.

The most dramatic new features, apart from all-new styling inside and out, are the engine and suspension changes. The Mustang will now have fully-independent suspension in front and rear on all models. Engine choices are the familiar 3.7 liter V6 and 5.0 liter V8, and the new 2.3 liter EcoBoost four-cylinder, which produces 305 horsepower and 300 lb.-ft. of torque.

With a starting price of $24,435, the 2015 Mustang has a number of new standard features including rear view camera, HID headlights, push-button start and SYNC system with AppLink. Other features will be available as options, such as touch-screen navigation, adaptive cruise control, blind spot monitoring and collision warning.

Along with the new powerful EcoBoost engine, the new Mustang has a few other performance enhancements that are available. There will be selectable drive modes to allow changing the car’s setup depending on if you are at the track, on the road or in snow/wet conditions. The Mustang GT will have an electronic line lock system with launch control, which will allow for maximum acceleration at the track.

To continue the celebration of the Mustang’s 50th anniversary, there will be a 50 Years appearance package available for Premium package models. It includes a chrome accented grille, unique badging, interior details and 19-inch alloy wheels.