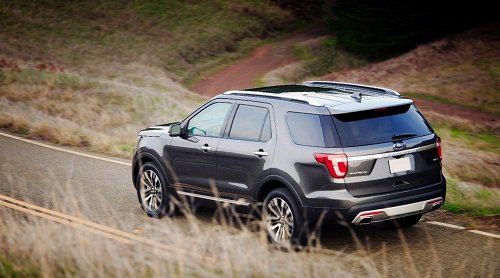 For its 25th year on sale the Ford Explorer is getting substantially updated for the 2016 model year, with all-new features, fresh styling, additional powertrain options and new trim levels. When the original Explorer was launched for 1991 it combined the right amount space and capability customers wanted in an attractive package, and the new Explorer continues that mission.

The new Explorer features new smart technologies throughout, including front and rear wide-angle cameras with washers, enhanced active park assist, smart-charging USB ports that charge devices up to two time faster, a hands-free liftgate, active grill shutters and air curtains that help minimize drag on the outside of the vehicle.

A new EcoBoost engine will also be making its way into the 2016 Ford Explorer. The 2.3-liter turbocharged four-cylinder is rated at 280 hp and 310 lb.-ft. of torque, making it 17 percent more powerful than the 2.0-liter EcoBoost it replaces. When equipped with the new engine, the FWD Explorer still gets an EPA-estimated 28 mpg on the highway, making it best in class.

The 3.5-liter V6 engine remains standard on base, XLT and Limited models, and the powerful 3.5 liter twin-turbocharged EcoBoost V6 comes standard on Sport and Platinum models. All engines are mated to a six-speed SelectShift automatic transmission.

Available four-wheel drive with Terrain Management System gives great handling and traction in nearly any terrain, including snow, sand and mud using a simple dial located on the center console. An improved suspension design allows for better handling and a quieter ride, with unique tuning and parts in the Explorer Sport and Platinum models for a more dynamic driving experience.

Production is already underway for the new 2016 Explorer, and most trim levels are expected to go on sale early this summer, with Platinum edition models being introduced later in the summer. To find out more about the Explorer and other new Ford vehicles, visit us at Five Star Ford near Dallas, Texas.