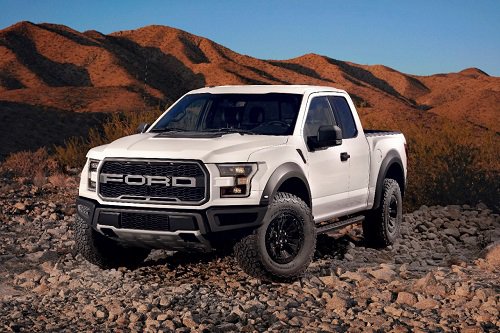 FOUR WHEELER recently named the all-new 2017 Ford F-150 Raptor its Pickup Truck of the Year, beating out six other off-road vehicles in the publication’s annual test. The new Raptor hasn’t been on dealer lots too long, but it is already winning awards from a number of outlets, including Best Pickup Truck of 2017 honors from Cars.com.

The FOUR WHEELER judges put the 2017 F-150 Raptor to the test in a weeklong test that put all of the competitors in a variety of harsh conditions, including sand, snow and rocky trails. Roughly 1,000 miles of off-road terrain was covered in addition to track testing in Southern California, where the EcoBoost-powered F-150 Raptor led the field in acceleration and quarter-mile times.

“The all-new 2017 Ford F-150 raptor is the truck equivalent of an amusement park thrill ride,” said Ken Brubaker of FOUR WHEELER. “Compared to its predecessor, which also had a very commanding stance, the new Raptor has more ground clearance and a significantly wider track that makes it look incredibly aggressive. The excitement continues when you fire up the high-output twin-turbo 3.5-liter EcoBoost engine and stab the throttle.”

New to the 2017 F-150 Raptor are several performance and technology features not previously available, including its 450 hp EcoBoost V6 engine which outputs 510 lb-ft of torque. The 2017 Ford F-150 Raptor is also the first in its class to use a 10-speed automatic transmission and it features a six-mode Terrain Management System.