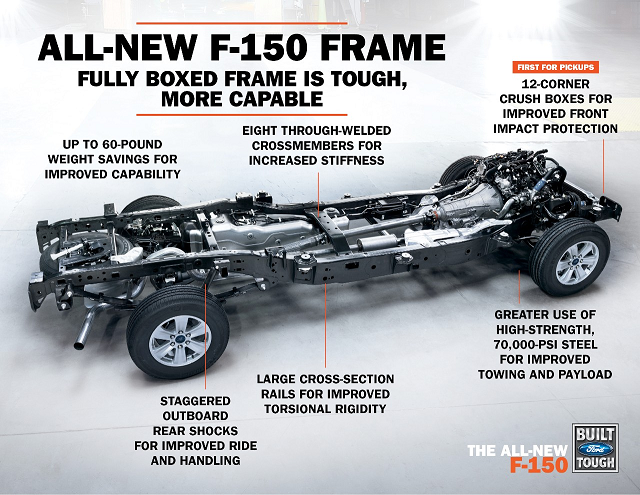 The National Highway Traffic Safety Administration awarded the new 2015 Ford F-150 its five-star Overall Vehicle Score, which is the highest possible rating. A total of 31 new safety-related innovations went into making this the safest F-150 ever.

By using high-strength steel in the frame and military-grade aluminum alloy in the body, Ford was able to save weight and increase the 2015 F-150’s crashworthiness. New shapes and structures were designed and tested with the new materials to ensure they were safer and more durable than before.

When engineers started designed the F-150, they used supercomputers to simulate how the new parts and materials would react before ever crash-testing in a lab. Nearly 1.4 million separate elements were examined, which showed how even the smallest parts would perform in a crash.

New techniques are being used in the building of the 2015 Ford F-150 to help improve safety, including using hydroformed roof rails to create a cage-like structure around the doors. High-strength adhesives are also being used instead of welds to join some parts, which has helped increase structural strength.

Active safety features are also being used to help keep passengers safe, no matter the conditions. Curve Control technology senses when the F-150 is going too fast for a curve, and slows the vehicle down to retain stability. Inflatable rear safety belts are also available, which is a segment-first feature.

To find out more about the advanced safety features of the new 2015 Ford F-150, visit us at Five Star Ford near Dallas, Texas. We have a large selection of new F-150 models available in our inventory, ready for you to come and test drive.