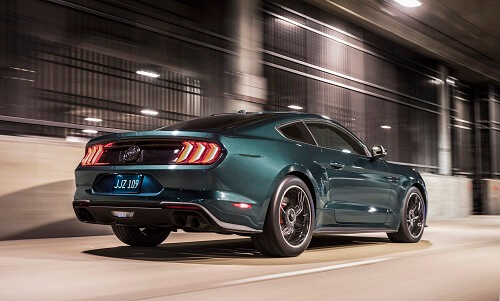 Ford wowed fans around the world when it introduced the limited-edition Mustang Bullitt at this year’s North American International Auto Show. The 2019 Mustang Bullitt is an homage of the original 1968 Mustang GT fastback which starred alongside Steve McQueen in the award-winning classic film “Bullitt.”

Fans of the iconic movie car will soon be able to own one of their own, updated for the modern era. The Mustang Bullitt features classic Dark Highland Green exterior paint, subtle chrome accents, a 12-inch all-digital LCD instrument cluster and available RECARO black leather-trimmed seats with unique green accent stitching.

The Mustang Bullitt celebrates the 50th year of the iconic movie and its famous San Francisco car chase against a Dodge Charger. As a special way of introducing the third-generation Bullitt, a third-generation member of the McQueen family, Molly, starred in a special movie where the Mustang Bullitt races through a parking structure battling a Charger for the final free parking space.

Under the hood, an upgraded 5.0-liter V8 engine comes standard with an impressive 475 hp, 420 lb-ft of torque and a higher top speed of 163 mph. All limited-edition Mustang Bullitt models are equipped with a manual transmission that features a white cue ball shift knob in reference to the original “Bullitt” Mustang.