Customize Your Perfect Mustang with an All-New App 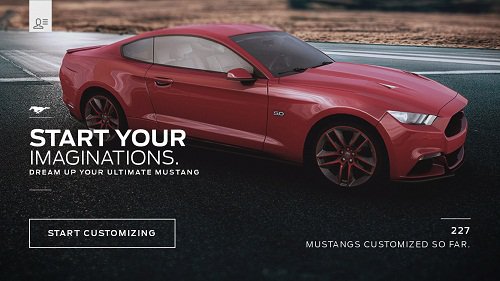 Part of the fun of the Ford Mustang is being able to customize your car exactly the way you want. With dozens of color and graphics combinations, multiple wheel options, various interior colors and other exterior accessories, it’s easy to make your Mustang one of a kind.

To complement the all-new 2015 Mustang, Ford has completely redone the Mustang Customizer app, making it easier than ever to design the pony car of your dreams. After customizing a virtual Mustang the way you want, you can view similar Mustangs that are in stock at local dealers.

The new Mustang Customizer app is available now on both the Google Play Store for Android devices and the Apple App Store for iPhone and iPad. Soon a desktop version will become available. Since 2009, Mustang fans have built more than 5.4 million custom Mustangs online, and the mobile app has been downloaded more than 1.6 million times.

New features in the app include a dynamic 3D rendering with improved graphics, which allows the car to be viewed from nearly every angle. Fans can now share their customized Mustangs on Twitter, Facebook and Instagram as well.

More features are still set to be added in future updates, including a video creation mode and the ability to place a custom Mustang anywhere in the world with Google Streetview. A new interactive racing game is also coming later this year.

If you are ready to customize the Mustang of your dreams, you can download the all-new app now. To experience the real thing and take a test drive in the 2015 Ford Mustang, you can visit us at 5 Star Ford in the Dallas Fort Worth area.