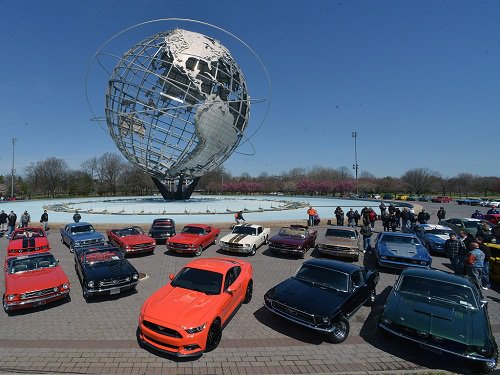 Dallas is a long way from this meet up, but you can find new Mustangs at 5 Star Ford.

To continue the celebration of the 50 year anniversary of the iconic Mustang, Ford put together a showing of 94 Mustangs at Flushing Meadows Park in Queens, New York – site of the 1964 World’s Fair. There were cars from every era of the Mustang’s history, provided by New York area Mustang club members.

A 1967 Shelby GT500 Mustang fastback was picked as best in show by Moray Callum, the Ford vice president of design. Other mustangs that were in the running for the award were a 1965 Mustang K-Code convertible and a 1971 Mustang Mach 1 fastback.

Those visiting the World’s Fair on April 17, 1964 were among the first to get a look at the all-new Mustang. By the end of the day, more than 22,000 Mustangs had been purchased or ordered, making it one of the biggest car model launches in history.

“Standing where my grandfather, Henry Ford II, stood to reveal Mustang five decades ago is both humbling and inspiring,” said Elena Ford, Vice President at Ford Motor Company. “Mustang has become the heart and soul of Ford Motor Company.”

The mustang continues to change and improve, and the 2015 Mustang should prove to be its best one yet, with an all new suspension set -up promising better handling, and improved interior materials and design.

Take a look at our Ford Mustang inventory near Dallas, TX.