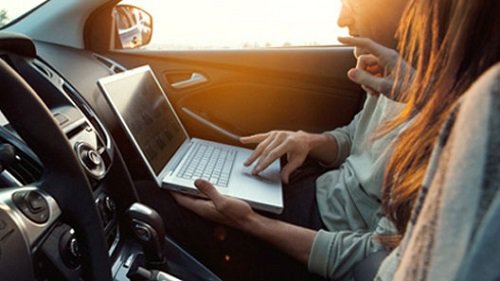 More than 5 million SYNC-equipped Ford vehicles dating back to the 2011 model year are receiving a software update that adds Apple Siri Eyes-Free capability for hands-free access to iPhone features. The SYNC platform was designed to be flexible and updatable, and this is another great feature buyers can use to keep their eyes on the road.

Ford owners can go to https://www.ford.com/support to download the update for their vehicle equipped with the second generation SYNC system known as MyFord Touch. The website gives a simple how-to guide of the update process, which involves downloading the update to a USB drive, starting your vehicle and inserting the drive into the vehicle’s USB port to begin the installation process.

Once the update is installed, Siri Eyes-Free can be activated with a long press of the voice recognition button on the steering wheel, much like you would activate Siri on an iPhone by holding down the home button.

Drivers can then use their voice to ask Siri a variety of requests, including making phone calls to contacts in their address book, looking up phone numbers to restaurants, setting reminders or alarms, asking about the weather, playing music, sending and receiving text messages and getting directions with Apple Maps.

For newer Ford vehicles equipped with the latest SYNC 3 system, Siri Eyes-Free is already built in and can be used without any updates. When new features are added, SYNC 3 equipped vehicles have the added benefit of receiving updates over Wi-Fi, making it easier than ever to get the latest features in your Ford vehicle.

To learn more about SYNC, Siri Eyes-Free and other features found in the full range of Ford cars, trucks and SUVs, visit us at 5 Star Ford near Dallas, Texas and check out our new Ford inventory for photos, prices, features and more.