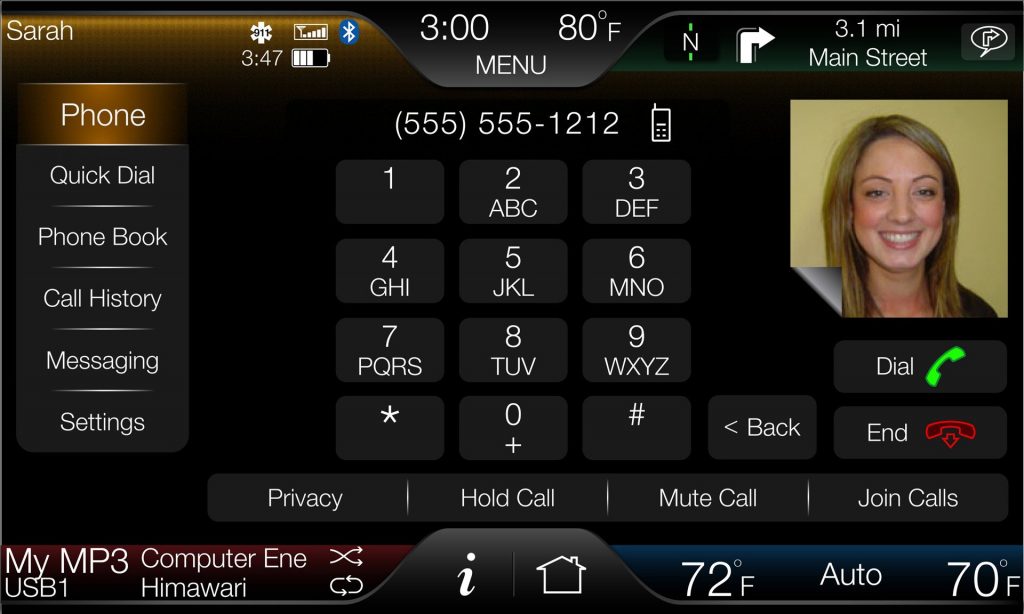 Once paired up with your vehicle, you can use your phone, through the SYNC system, without ever touching your phone.  It can remain within your pocket, purse, backpack, baby bag, or wherever else you may keep it.  Hands-free calling is the safest way to use your phone while driving.  You can place a phone call as easily as talking to another person in the car.

The VOICE button can either have the word Voice printed on it, or have a symbol that looks like a face with lines coming from it.  Simply press the VOICE button on the steering wheel, and say “Call John Smith on cell” after the command prompt.  Certain phones (phone service provider dependent feature) will also allow you to listen to TEXTS received on the phone.  For ones that do, all you need do is press the VOICE button, releasing it quickly, and say “Read Message” or “Read Text” after SYNC asks for a command.

The process for pairing your phone the very first time is not hard, but it does require several steps.  This is something that I receive phone calls and assist with in our Service Department fairly regularly.

Step #1 – If you have never paired your phone before, or a new phone, or previously paired phone

On the Touch Screen in the Center Stack, find the Phone Quadrant (the entire upper left quadrant).  If it says “ADD PHONE,” no phone has been previously paired. Press anywhere within the quadrant.  It will take you to the “ADD DEVICE” Screen, where it tells you to “Find SYNC” (on your phone), “Begin the Pairing Process from your Device and PIN Option will appear.”  Below this it will display a 6-digit PIN.  You can also start the pairing process using the PHONE button on your steering wheel.  Some vehicles also have a phone button in the center stack (under the touch screen). Find and press the Phone Button.

If this is the case, press the SETTINGS button at the bottom left of the PHONE Screen.  At the top of the screen it says BLUETOOTH DEVICES. Click on this and it takes you to another screen, at the top of the right-hand menu, it says ADD DEVICE – press this.

The system will generate a 6-digit PIN code and display it on the screen.  When your phone recognizes SYNC, it will pop up a pin-entry screen on your phone and a new window asking if the numbers match.  Some phones require that you key in the PIN displayed on the screen in the center stack.

Find the Bluetooth menu on your phone.  The location of this will vary by maker, however, it is generally found within the SETTINGS menu.  On some phones, it is located within a menu labeled TOOLS. Bluetooth may be found in other menus, such as CONNECTIVITY.  Within the menu, you will find the option to Pair your phone with Bluetooth devices (the directions for this will vary also, I have also seen terms other than Pair).  Most phones require that the phone be made DISCOVERABLE.  Most phones have a SEARCH feature that you will have to enable to locate Bluetooth devices.

Sync will ask you several questions and will give you audio cues as it goes.  Pay attention to what it is asking.

1) If you are pairing a second device, SYNC will ask if the phone is to be the primary phone.  Press YES or NO to select.

2) When it asks about 911 assist (only the first time pairing), you want this on.  The system automatically calls 911 if your airbags are deployed.  SYNC will ask to download your phonebook, and assumes that you want this. You do not want to download the phonebook?  If this is the case, select NO on the screen and press the button on the bottom of the screen to approve.

3) Don’t neglect the screen of your phone at this time, as many phones will ask permissions to share contacts/messages.  Especially Androids.  If you do not approve this, SYNC will not be aware of changes to your phonebook; it might not download the phonebook altogether.  So, if you added your friend that you ran into to your phone, then the number won’t be in the phonebook in your vehicle.  If you approve this, the phonebook will automatically update additions.  MESSAGING, if your phone requests this, your phone may allow you to listen to Text Messages in the vehicle through your SYNC system.  If there is a check box on the screen, be sure to check it so that it will “Always Do This.”

4) iPhone – does not ask all the permissions.  For texting, however, you need to go into the Bluetooth Menu on your phone.  To the right of SYNC in the menu is a little blue button that looks like (i) or (>).  Press this button which gives you another menu for your phone.  You can also name the vehicle here.  There is a toggle switch labeled Show Notifications.  Toggle this on to receive texts.  Down below you will also find GROUPS.  You can determine which groups are loaded into your phonebook within the vehicle.  If you have a large phonebook, this can be a big time-saver.

5) WINDOWS Phones –  The Windows phones are very similar to Androids in many respects.  However, some (dependent upon manufacturer and service providers) can be enabled to do VOICE TEXTING within the vehicle.  It is a setting located within the phone’s Bluetooth menu.  This is not a feature listed on Ford’s Phone Compatibility Matrix; I found it by accident the first time, and have set the feature up for several customers, now.   Once enabled, when you have SYNC read your text to you, it then asks if you would like to respond by voice.  You tell it “YES,” it asks what you would like to text.  You speak your message, which it confirms before sending.