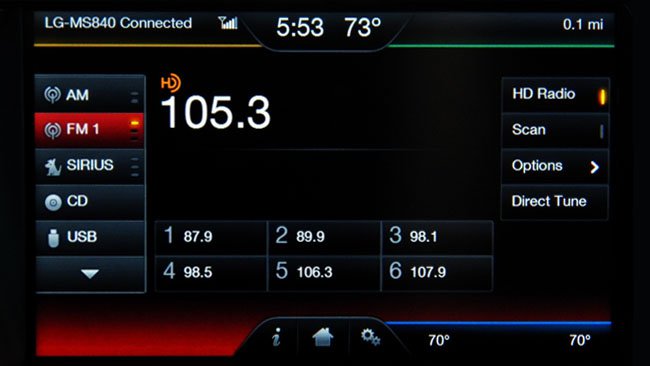 SIRIUS XM Digital Satellite radio features tons of entertainment options for the listener! Whether you want Rock, Country, Pop, Comedy, Christian, Talk, News, or Sports – there are many choices for you!

You can use DIRECT TUNE to tune to the station number, use your SEEK buttons on your steering wheel to cycle through presets, or tune by voice command saying the name of the station – “Willie’s Roadhouse.”

Don’t know what stations are available to listen to?  At the bottom of the right menu is BROWSE – allowing you to browse through all the different genres as they are grouped.

Also featured on the screen is the ALERT button.  Like a song that’s playing enough to want to hear it when it comes on again? Click this button, and will take you into a menu that, once enabled, you can be alerted when either the song or artist is playing.  If you are listening to SIRIUS radio, an alert will pop up on the screen to notify you when your song/artist is playing and ask if you want to tune to the station.  Don’t create an ALERT for Elvis – he has his own station, is played on classic rock, country, and gospel channels.

The system has a single CD player.  Controls on-screen, below the screen, on the steering wheel, and voice command.

Who needs to carry around a bunch of CDs in their car when you can load tons of music onto a single device?

Massive music libraries can be stored on phones, iPods, iPads, and other portable music players. Ever think about a USB thumb-drive (jump-drive)?  Whatever device you choose, this is a great option!  Just plug your device in to the USB port in the console and go.  If the music is stored on an iPod or similar device, start the music playing on the device. Depending upon how much media you have stored on your device, it may take a few minutes to index for voice commands.  Press the VOICE button on your wheel, say “USB” and let the fun begin.  Your vehicle will prompt you by saying “USB” back to you.  Say “Play” to get the music started.  After indexing, you can control by voice-command the music you have stored on the device.

Commands like – “Play Artist Elvis,” “Play Album Blue Hawaii,” Play Song Blue Suede Shoes,” to play a playlist you would say “Play Playlist Name,” “Play All” to listen to all tunes. “Shuffle On,” Shuffle Off.”  You can, of course, use your forward and backward buttons on your steering wheel to change tracks or rewind and fast forward.

USB Thumb drive – Why choose this? You have the same functionality as an iPad or other device, but if you left this sitting on the seat of your car, no one would care. Leave a phone, iPad, iPod, or other similar device sitting out in your car, and it will become a target. As a matter of fact, if you were to leave the white iPhone/iPad/iPod cord out and it is very possible that someone will break into your vehicle to see if the device is in the car.

The functions are the same for SD cards, but not on systems with navigation.

Have oodles of music on your phone, but don’t want to plug in? Want to listen to Pandora or other media off of your phone, or another device playing BT Audio with your phone still connected as the phone?  Here’s your answer.  Press the VOICE button on your steering wheel, and say “Bluetooth Audio.”  Android phones, oftentimes will start playing the very last track you were listening to.  On iPhones, iPods, and iPads, you will sometimes need to start the app or music playing.  There is no voice command option for BT Audio, but you can still use your forward and backward buttons to skip tracks.

If equipped, the MyFord Touch system can also play audio and video, with some limitations.  If you have a portable video device, it can be plugged into the console with and RCA cable.  Video will not be displayed on the 8” screen unless the vehicle is not in motion. If you have children in the back seat watching on a portable DVD player, or if you have the players in the headrest, the audio can play through the stereo system while driving.