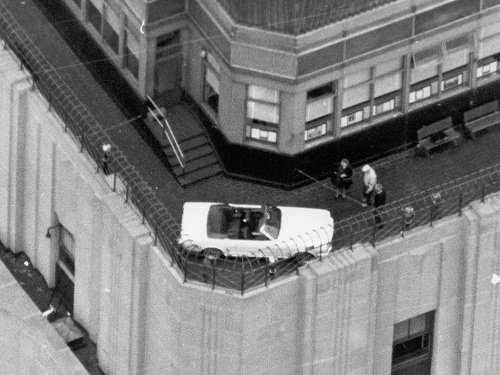 In April 1964, Ford unveiled the first ever Mustang convertible on the 86th floor observation deck of the Empire State Building during the World’s Fair. The stunt was no easy task though, as the Mustang had to be carefully dismantled to make it up the building’s freight elevator.

To celebrate the Mustang’s 50th anniversary this year, Ford has once again put a Mustang on the observation deck of the Empire State Building. The car is in bright triple yellow paint and over 1,000 feet above the New York City streets. Just like in 1964, the convertible had to be cut into pieces before it could make the ride up the elevator, as airlifting the car would be impossible.

Ford Motor Company contrancted a company called DST to figure out the details on how to get the Mustang on top of the city’s tallest building. They built a mock up of the freight elevators to analyze how much space they had to work with, along with how wide the doors are. After five hours of building last night, the car was successfully put together and will remain there for the next couple days while the New York Auto Show is happening.

While the yellow Mustang sitting atop the Empire State Building may be lacking an engine (and structural integrity), it certainly doesn’t lack style.

Look for deals on new Mustang Cars for Sale near Dallas, Fort Worth, TX.