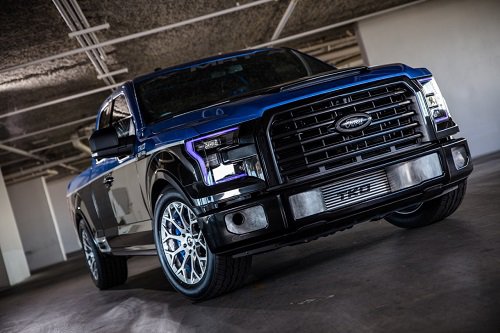 At this year’s SEMA show in Las Vegas, Ford had some of the most popular customized cars and trucks on display. The Ford Focus, Mustang and F-Series won Hottest Sport-Compact, Hottest Car and Hottest Truck at the show, which marks the first time any manufacturer has won three of the event’s awards.

There were over 28 Ford vehicles featured on the Ford stand alone, with nearly 50 Ford cars, trucks and SUVs on display when combined with the popular Ford Out Front demo track. Ford featured custom builds of six Ford Focus and Fiesta STs, seven Ford SUVs, eight Mustangs and seven Ford F-150s.

Both the Mustang and F-Series have proven popular among specialty equipment manufacturers for years, with each vehicle winning multiple awards in years past. This is the first year the Focus has won Hottest Sport-Compact at SEMA, thanks to the car’s continually increasing popularity in the aftermarket community.

“Winning SEMA’s hottest vehicle awards for Mustang, Focus and F-Series is a great affirmation of the popularity of Ford vehicles with this trendsetting part of the market,” said Dave Pericak, director of Ford Performance. “We’re proud the aftermarket has embraced these three vehicles with as much enthusiasm as our customers invest to personalize their Mustang, Focus and F-Series.”

There were customized Ford vehicles from many of the most popular car-customization experts, including Chip Foose, Petty Garage, Roush Performance and Galpin Auto Sports. There were even a number of classic Mustangs on display, including a beautiful restoration from Kar Kraft and rally driver Ken Block’s custom 1965 Mustang dubbed the “Hoonicorn.”

Learn more about the latest Ford vehicles by visiting us at 5 Star Ford near Dallas, Texas and by checking out our online inventory for photos, prices, features and more.