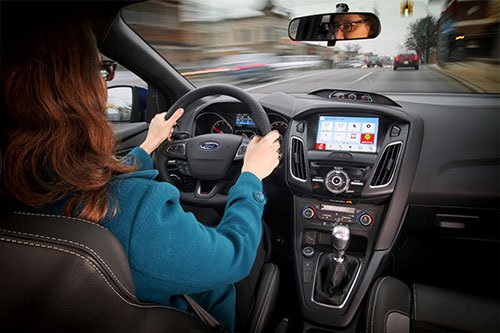 Ford showed the newest update to the SYNC car infotainment system today, called SYNC 3. The new communications and entertainment system will be faster and easier to use than ever before, with enhanced voice commands, a streamlined user interface and improved touchscreen controls.

When building this next generation of SYNC, Ford analyzed 22,000 customer comments and suggestions to find the best ways to improve the experience. SYNC has been installed in over 10 million vehicles globally, so Ford had lots of consumer feedback to analyze to make an even better experience.

SYNC 3 will now use a capacitive touch screen, much like your smartphone or tablet, including features like pinch to zoom and swiping. The new interface uses a bright background with large buttons and a high contrast font to avoid washout in sunny conditions, and then switches to a dark background at night to reduce eye fatigue and unwanted reflections on windows.

Improved voice commands mean you can search with fewer steps and use more natural language. Saying “play [song name]” will prompt the system to play that song, rather than having to use a specific command. Searching for addresses and points of interest will be improved as well. As an example, users can now say “eleven twenty-five main street” instead of having to say “one one two five main street.”

SYNC 3 also has AppLink included, with the ability to automatically detect supported apps installed on your smartphone such as Spotify, Pandora, NPR One and iHeartRadio. SYNC will also be able to update over a home Wi-Fi network, making it easier to download the latest updates. And like prior versions of SYNC, there will be a subscription-free emergency 911 Assist service built in, which can relay critical information to emergency services.

To find new Ford vehicles with SYNC, visit our new inventory at Five Star Ford, serving the Dallas/Fort Worth area.