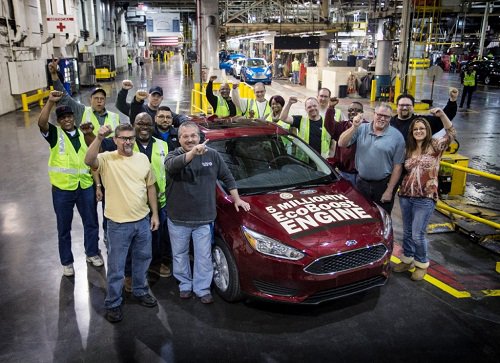 Last week, the 5-millionth vehicle with a Ford EcoBoost engine was built at Ford’s Michigan Assembly Plant in Wayne, MI. A Ford Focus SFE with the 1.0-liter EcoBoost three-cylinder was number 5 million, with the first being the 3.5-liter EcoBoost V6 in the 2009 Ford Taurus SHO.

Less than three years ago, Ford was celebrating the 500,000th EcoBoost-powered vehicle produced, and now there are ten times as many EcoBoost vehicles. 2015 is the first year where every new Ford passenger vehicle can be ordered with an EcoBoost engine, with some vehicles including it as standard equipment.

The 1.0-liter EcoBoost three-cylinder, found in the Fiesta and Focus, offers power similar to larger 4-cylinder engines, but with fuel economy of up to 42 mpg highway. The engine has won International Engine of the Year three years in a row, and been on the Ward’s 10 Best Engines list for the last two years.

The 2.7 and 3.5-liter EcoBoost V6 engines have been popular in the Ford F-150, offering the power of traditional V8 engines, with improved fuel economy and competitive tow-ratings. This year a retuned version of the 2.3-liter EcoBoost four-cylinder from the Mustang will be in the all-wheel-drive Focus RS, and is expected to produce more than 315 horsepower.

To test drive a new EcoBoost vehicle, visit your local Five Star Ford dealership in the Dallas Fort Worth area. You can also sign up for the EcoBoost challenge, which will be visiting Texas again next month, where you can compare EcoBoost Ford vehicles to the competition.